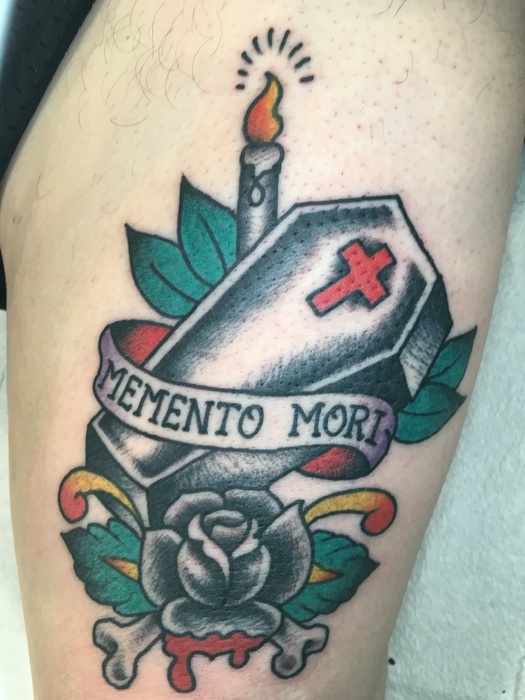 The jumping off point is important in all things. Do we plan endlessly, or rush in without a single thought? Are we the kind to just talk about it? Or are we the type to attack and achieve the desired action? When the task is complete, do we pat ourselves on the back, tear ourselves down, or are we at peace with a middle way? Do we make excuses for what we lack? Do we simply blindly stand behind what we have done? Or do we honestly assess our little victories and failures within the project? Do we posture, attempting to hoodwink the other that we are larger than we are? Do we shrink back into the shadows and cower in insecurity? Maybe we assert our own dignity and give others theirs. Maybe we think everyone deserves respect. Maybe we think respect is earned.

The Artistic Process Of A Great Tattoo Artist

The artistic process fascinates me greatly. I don’t even understand my own! I do work on my process though, over and over. I am at one with it. Maybe that is why it is still a little unknown to me. How accurately is each one of us allowed to see ourselves? But that is unimportant, what is exhilarating is going along for the ride! This is the artistic journey. Are tattoos the ultimate in art? This tiny, marginal art form that used to exist in the shadowy areas where deviant leanings were allowed to grow? This once almost subterranean practice of marking the body like savages while the industrial world grinded around us? And in particular the strength of pure American Traditional Tattooing is this the ultimate in any art?

Most would scoff at the very thought. But I remember a time. It is a time I reminisce about with my clients over and over again. It was the moment my eyes first looked upon a traditional pinup girl tattoo done by Eric Maaske. At once, the power hit me, and passed through me, and nourished me, and destroyed all prior precepts of art in an unapologetic visual onslaught of bold lines and strength of attitude. Van Gogh disappeared, Redon reduced to rubble. Dali was decimated. Escher was eschewed. Picasso was Pabloed. Even Hokusai, mighty with the brush as he was, was made to look like the old guard, whose time had come and gone, who just didn’t get the new wave, whose work was too elegant, too refined, for an emerging culture that hungered for raw power.

Page after page of panthers, pin-ups, and pike lettering. The magazine pages went up in flames in my hands, just like flames blazed behind tattooed girls faces, old school Mercurys, dice and cards. The images of luck and lust intertwined. The cool of total power conquered all other thought. These images were alive! These images were life. These were real American tattoos. Maaske had studied the masters, copied them, and ultimately, created his own world, becoming a master himself.

The singer Exene, from the seminal LA punk outfit X, would soon have a similar effect on me. Here was a poetess that could not sing a lick, but boy could she deliver a song. She could paint you a feeling and you would believe it so deeply you’d think she sang like Loretta Lynn or Billie Holiday. But no, this ragged punk, buzzed on vermouth just wailed her insides out. Great, unheard music came of it. Before you think this tune is unlistenable, her vocals were offset by the crooning and correct singing of bass thumper John Doe. So you had the beauty and the beast at work there. The devil was also in the details of the ever smiling, heavy riffing, Django influenced Billy Zoom, whose rockabilly stylings snuck into the punk paradigm whenever and wherever he saw fit. DJ Bonebrake pounded the skins and left no beat unturned, from fast to churning, “Motel Room in my Bed” to “Nausea”. Unbelievable group, and then Exene would top it all off with beautiful liner notes inside each album, including lyrics and old English lettering. Tiny crosses and good luck horseshoes would intersperse with 13’s and dashboard virgen de guadalupes. Praying hands and devil heads and dice and devotional candles. Anything sacred or profane. And then let a cigarette burn on it, fashion a homemade tattoo of it, watch Darby fix? Lindsey took me by the apartment where it all went on. Right there outside of Hollywood somewhere. Bukowski had lived in that apartment too. At a different time, swilling the worst and admiring the fillies as well as the ponies. Anyways, it was the little images in the liner notes- the four-leaf clovers and the lucky numbers that I thought of while trying to grasp the mystical power of Maaske’s work. But his was more horsepower than spiritual maneuvering. His was real-world pedal to the medal buddy. No faith, just what you see is what you get real-world straightforwardism. But he was just the doorway, albeit a grand, stately, muscular, American doorway.

He led the way to Sailor Jerry. He led the way to Rollo too. Now that my eyes were open, I was ready for the one-two punch of the classic American traditional tattoo. Now I had trouble seeing anything else. Now I was a convert, a true believer. I had been spoken to, and I heard the word. I left the tattoo parlor where I was having a traditional Japanese tattoo put on. I drew a lucky black cat head. I used as few lines as I could and then I shaded it black until it wouldn’t take anymore shading. I colored the tongue red and the eyes yellow and it was done. It was the best thing I had ever drawn. I had tried to make it look like Maaske did it. 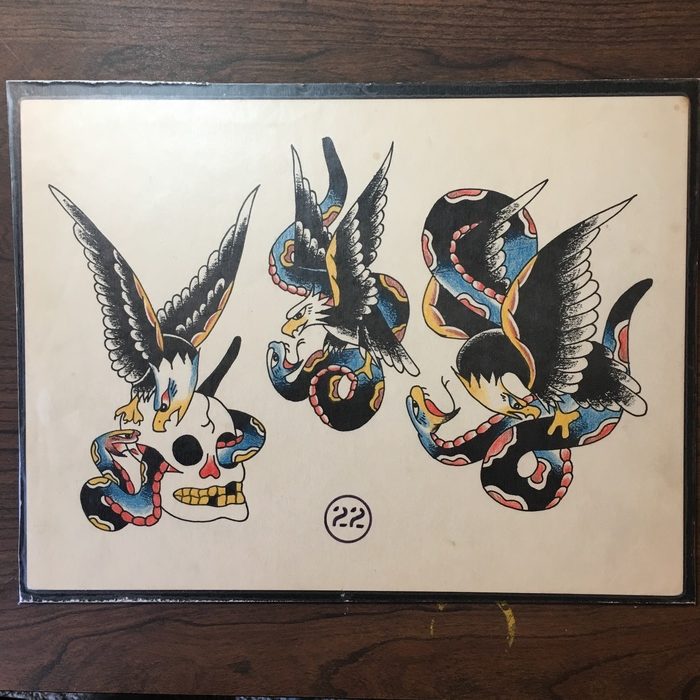 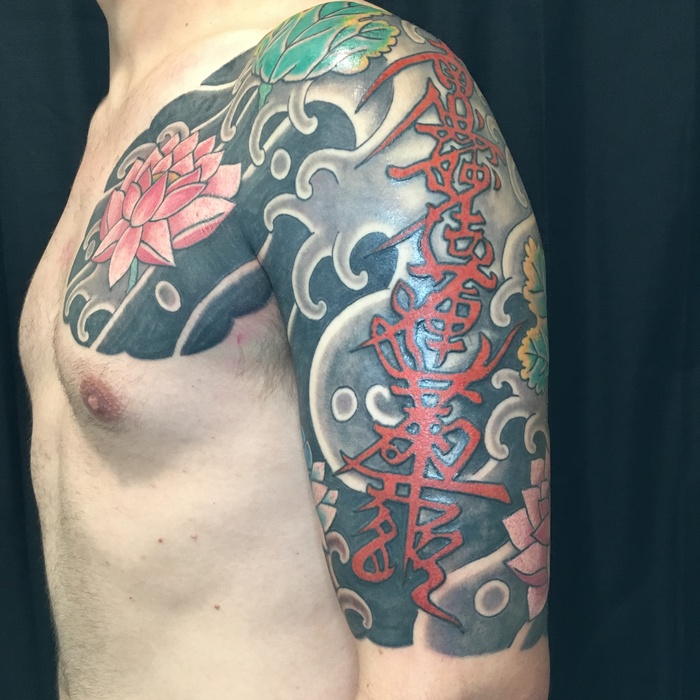