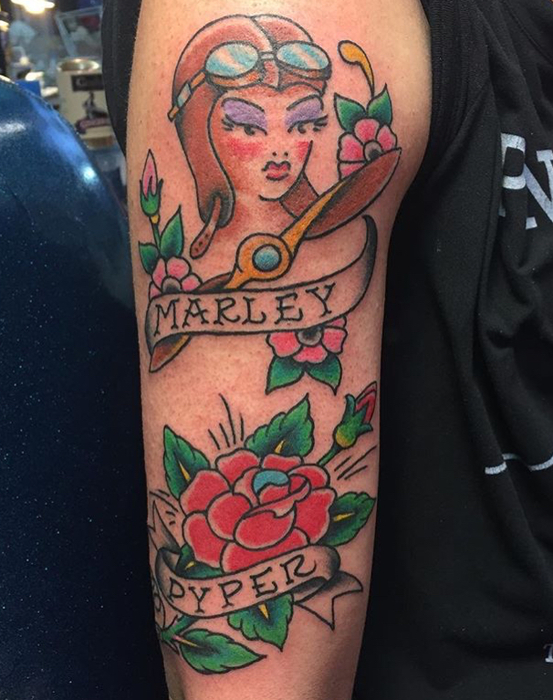 One Of The Smartest Men In Tattooing

I used to call him “The second smartest man in Tattooing.” I mean, hey, no one can be smarter than Scott “Welt” Harrison. Well, maybe Hardy. Yeah, Hardy’s probably the smartest. Alright! So our hero has been demoted, but number three out of three hundred thousand ain’t nothin to sneeze at! Of course, I only know a couple hundred of ’em so maybe I’m way off. Smarts? Why do smarts matter in tattooing anyways? This is traditional tattooing, this is the world of pictures. Silent, strong pictures. A still life in the midst of a world of action. Smarts matter because talking is the way you pass the time out on the road, counting the miles between tattoo conventions and guest spots and stops along the way. It was times just like these that I was able to have the blessing of delving deep into the mind of the best tattoo artist in Dallas, Texas, Mr. Norman Dean Williams.

It was Confucius who said, “when I turn up one corner, he will turn up the other three”. It has been years since I read this, and yet, it comes to mind when thinking of these hundred-mile conversations with Dean. I think that this means conversation, I think that it means understanding, illumination, and energy. If I initiate the idea he can take the idea and run, then pass it back to me, and chew on it awhile as we drink in the car, Red Bull or Budweiser.

Not drinking and driving of course! We are not complete idiots! As many of you know, Oliver Peck is the great ringleader and he musters up many meetings, trips, brainchildren, etc. Well, one of his big successes, idea wise, was his idea to buy an RV with Keith Underwood. Traveling the country, living well and tattooing up a storm, oftentimes following the warped tour and tattooing the musicians, roadies, tour managers, promo and production crews, et al. So anyways, the setting of many of these conversations was that first RV. Come to think of it, I guess the first “Gypsy Queen” was a trailer. Oliver and Aaron Finnin hooked that up behind a huge American made pick up truck and pulled it with a Cummings, but the first RV is what I’m talking about before Ryan “Dreyfus” Mattes took over as driver and we would roll steadily throughout the night. I say Budweiser because on one of these trips out to California Oliver had thrown a keg on board. Keep in mind the dude doesn’t drink but for some reason, he likes to be around it! It’s an instigating thing or something! Or, you know what it is, he just loves fun however it is manufactured! So there was that one time I drank Budweiser all the way to California. We drove all night, I drank all night. I would stop to eat a hamburger here, an apple there. Then, I would put the plastic cup back beneath that sudsy tap and fill it up again. I would get out my sketchbook and a sharpie and draw. The bumps weren’t much in that thing. We would all just sit around talking and laughing. Slim from True Widow was there, maybe tattoo artist extraordinaire Chris Erickson. I think Elm Street Tattoo’s senior tattoo artist was there, Mark Galvan. To tell you the truth all that Bud makes it hard to remember. In a way, this was a low point in my life. In another way, it was a pretty high one!

Dissecting The Art Of A Tattoo

Dissecting the art of tattoo with Dean Williams always put a sharp edge on my thinking. Hell, I had to try and keep up with his acerbic tongue and mind. Dean has a great way of looking at tattooing, so old school, and yet so fresh at the same time. Beginner’s mind, as the Buddhists call it, he is like a kid on Christmas when exploring an artistic idea, whether it be on the skin with paint or with mere words. I am remembering a tattoo convention in San Fransisco where he and I stood outside with Tony Hundahl and continued the tattoo philosophizing we had started out on the open road. We agreed, there ain’t no easy way into this thing called tattooing. There’s no shortcut for the hard work, ten thousand hours of drawing, of tattooing, of talking with customers.

And Dean hasn’t had any silver spoon handed to him in this world of tattoo. He started out long ago, at home. This is a place many so-called tattoo artists today would decry but they weren’t there back when Dean started tattooing. This is back when the only tattoo magazine out there was off in a corner of Outlaw Biker, and that was just about all the tattoos you saw Jack. Maybe your uncle had one. Of course, it was there, you just couldn’t see it. You couldn’t be an 18-year-old dude and know where the heavy tattooing was at man. Plus, Dean hailed from Midland, Texas. A town that is on the small side and known for its desolation, oil, and football, not its art museums and rock and roll venues, much fewer tattoo parlors. I know Dean moved off to South Dakota to work a roofing gig, or maybe it was drywall. Anyhow, some kind of man’s job and that is the kind of way that he started using his hands. Of course, he was no stranger either to a Les Paul, and I think he could draw just about anything since the time he could talk. I have seen some of his childhood drawings and I’ll tell ya I have never seen a kid that could draw like that.

When you talk about Dallas tattooing I think you have to automatically think of Dean. He has been there since what I would call the beginning. No, not the old days when the real giants of tattooing’s yesteryear walked the earth like dinosaurs, I am coming from the viewpoint of my own generation. The generation who emerged in the tattoo business in a concurrent wave with the resurgence of tattooing’s popularity in the early 1990s. So It is there we find our hero, plying his trade, working one of the earliest tattoo parlors in Dallas, in Deep Ellum at least. From this writer’s limited knowledge, at least.

Already Dean was drawn to the Japanese Tattoo, putting on dragons when he could, putting on that iconic water background, and the wind and clouds of the Japanese tattoo when he could. Of course, there was much chrome to be done! There were the twisted forks, the solar systems, and all the JD Crowe flash you could shake a stick at. This was the way that Dean cut his teeth in the business. You have to remember, the Sailor Jerry flash books would not be released for years! But of course, Dean had a stash of Jerry designs, and he would work those designs too when he could. I wasn’t around when Dean started out, this is just the way I have understood the story as I came into tattooing a couple of years later.

Working For A Tattoo Legend

Many years later I got the opportunity to work for Dean. The amazingness of the tattoos I got to see him do during those years can not be overstated. First of all, he could do it all and do it better than most, no matter what the style. He can put on a Traditional American pin up girl or skull tattoo that’ll slap you across the face like a traditional tattoo should. He can design a Japanese backpiece for you that will make sense to the rules of the form, of which there are many, and do so with a flavor that is entirely his own. He can put on a huge leg piece to compliment a woman’s form, he can put a portrait of your grandmother on you and you would think she is looking back at you.

A stream of consciousness memory of the tattoos I’ve seen him do or stared at for a cumulative period of hours in his portfolio would be the old world war two photo of the kiss, The Ganesha backpiece he did for Loki, a Willie Nelson portrait he did where you can see a thousand wrinkles, the chick he sleeved out with nothing but chrysanthemums and water, the back piece of the geisha where when he went to add background he knocked it out of this world by adding a bridge, the big tiger rib piece he did and started off by shading the whole thing yellow. There are too many dragons to name, too many faces of women, too many brilliant red roses, oftentimes with heavy flourishes of pink. Dean used bold tattooing in the sense of taking risks, going where others would not dare. The amazing way he will select only the important part of the image, just enough to fill whatever body part he is working on and damn the rest. Always adventurous like I said. A major hallmark of Dean’s work is its cleverness. There is always an “idea” present, always a twist, and it’s real so it’s great. It is telling of his mind and personality and it is true because the one thing this guy can not do is lie. A lot of artists try and get cute, they try and “say something”, they attempt to sneak in a pun or “elevate” the work but it’s all just a sham and you can smell it like a rat. I tell ya when you see Dean work a tweak to a classic tattoo or add an inside joke to a sleeve of Japanese Tengu, you appreciate it instantly and just as honestly as he put it on.

Clients Love Working With The Best Tattoo Artist In Dallas

All his customers love him, he blows their minds. Nothing is off-limits, he can and will come at you out of left field. They do not work with a guy like Dean, they do not know another guy like him, he is an iconoclast and a one of a kind and he is the kind of character that tattooing has been built around. And then his work is so good that he will attract the attention of the spare and soulless customer. Somehow he never ends up tattooing these lame-os. His customer base is as elevated as his work itself and I don’t mean some hoity-toity elite class of patron, I mean the real deal tattoo customer of all ages, sexes, and colors and walks of life. As long as they want a killer tattoo type by an artist that they cannot understand but can trust in 110 percent, Dean is their guy. Just as long as they want a great tattoo and a great experience to go along with it. That is the kind of thing that goes down in Dean’s station. 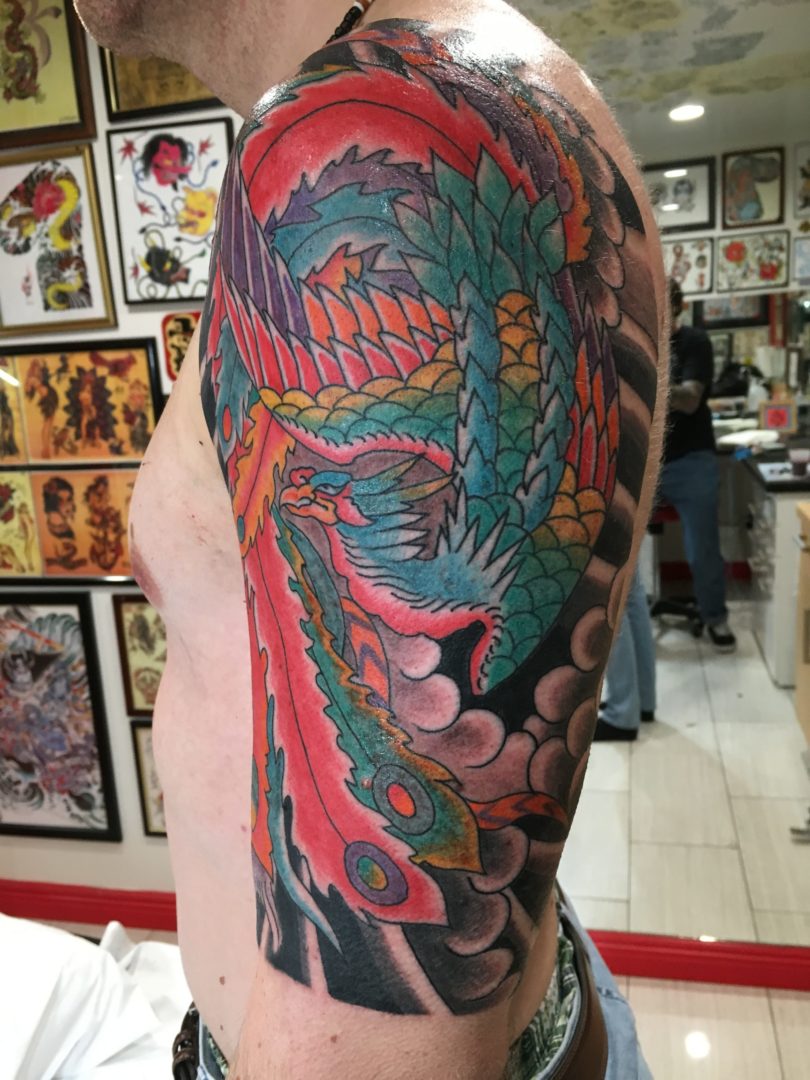 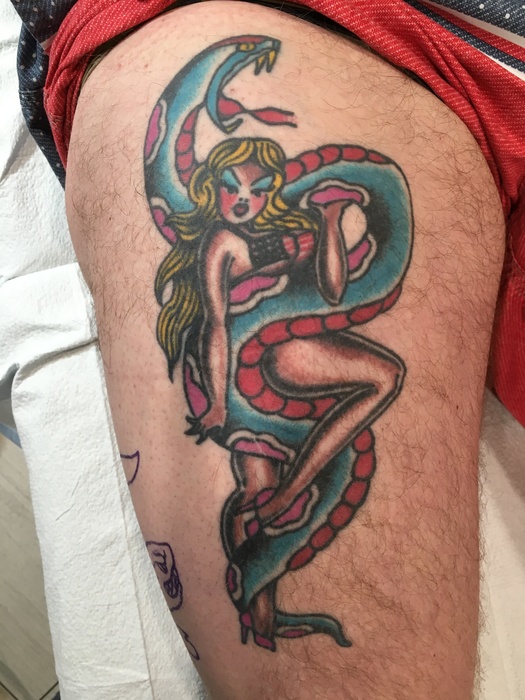