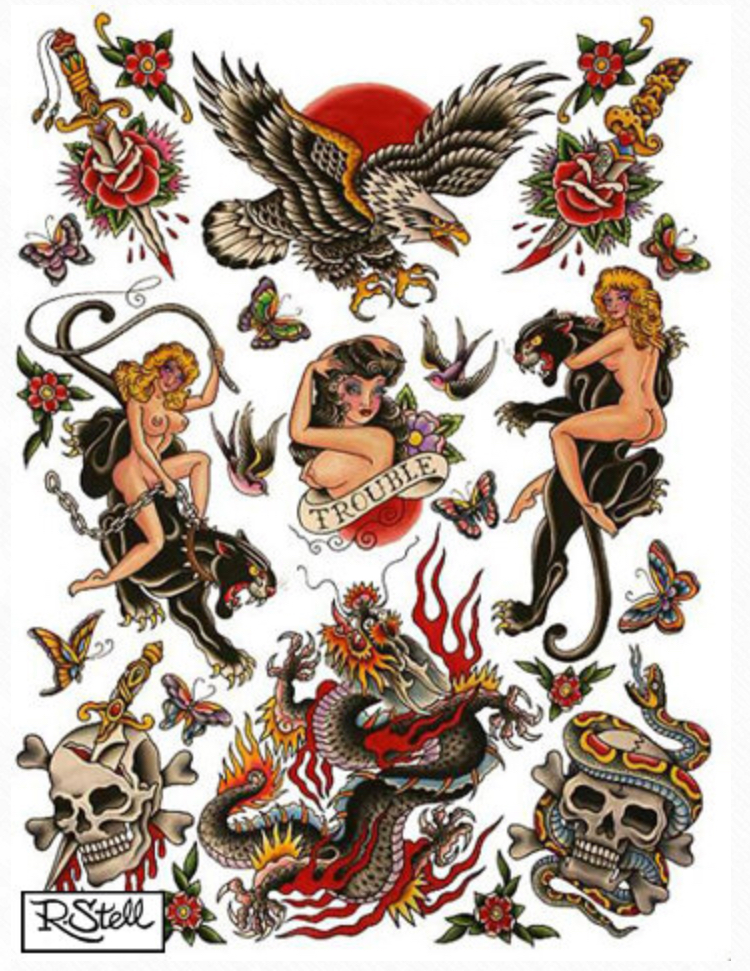 We are all at a different point in the path of becoming tattooed. We come across fellow travelers on this path, those who are at a similar spot in their journey towards the tattoo. The bonds we form here are very often very deep. The visceral experience of seeing or getting tattooed makes this almost an altered state. The reasons we do it are either so important to us or buried so deep, coming from such a natural place, that we don’t know exactly why we do it. Sharing this endeavor with another collector, a tattooist, or simply an admirer of the art can form friendships that last just as long as the tattoos we wear.

The Mystery of This Month’s Best Tattoo Artist

You do not have to be familiar with Dallas tattoo artists, in particular, to know of this tattoo giant of which I will speak today. If you have been on the path for a while now, you will know this man whether you are from Spokane or Saskatchewan. If you are new here, you will not know, or worse, you will only pretend to know. You are missing out, should this be the case.

This article is dedicated to the best tattoo artist in Dallas history. I am maybe incapable of painting a picture of this. I can’t even think of what to call him. “True artist”? No- that would not speak enough to his toughness. “Bad Ass?” No- that would not pay homage to his talent. “Friend?” No- that would not offer the respect that he is due as a master of the craft. Is that it, then- “Master?” No, that would not relate that his feet remain planted on the earth, his head held high, but never once with his nose up in the air. I am having trouble painting his picture. Wait!? Is that it? A Painter of Pictures.

Nevermind its the skin that he paints upon. Sometimes, it is paper- big, uncut sheets of watercolor paper that would have most artists grasping for scissors, to cut it up, to make it more manageable. Once, it was the outside of his tattoo shop in Deep Ellum- big traditional tattoo daggers on a yellow background with a ton of flames. How about that convention banner? Do you remember it? The one with the zany clown, wrapped up with a tattooed snake?

I am enthralled every time I encounter his work, out on the tattoo path. He tattooed so many regular Joes, so many everymen, so many people who had no idea who he was. He also tattooed many tattoo connoisseurs, ones who know the difference between the best and the rest.

A Look Behind the Artist

This became his meat and potatoes and we ate up every piece we could get from him. Of course, this put him on the radar of the tattoo fashionistas- the ones who go for name only- they are too ignorant to know if it’s good or bad, but they know THE NAME. Oftentimes they are one in the same but then you have the sycophants, the suck asses, the tattoo twerps who got here through less honest means.

They fooled somebody, somewhere along the way. I’ll tell you who they didn’t fool- the hero of our story. Anyways when I want to enjoy his work I just look down to my arms. As I write that I know that I am a rich man, just to have that privilege.

He might turn on the charm arbitrarily, which he has in aces and, as the saying goes, spades, but mostly he is not going to pander to you. He isn’t going to build the bridge to your business. He is of a different time. Respect, back then, was a precious thing that had to be earned. It wasn’t a birthright granted by some Coca-Cola commercial and a participation trophy.

Admiring the Work of the Best Tattoo Artist

Here is his work- you take it, or you leave it. No advertising, no customer service, just tough ass tattooing by a bona fide expert who could draw circles around you just as easily as he could kick your ass. If you are new to the path, it may be hard to understand this part of the story. It may be hard to explain that he is making you a better man by excluding you from his kindness. He is challenging you to cross that line, to engage in blind faith, to take the leap. He isn’t going to hold your hand. He’s going to push you into the fire. If you are pure, maybe you will come out the other side as a diamond.

A Pheonix. Or maybe you will burn, burn in a hell on earth because you were unworthy. Because you failed to earn this rite of passage down the path. And smote down, you must abscond, unadorned. No proud eagle tattoo to brandish. No beautiful flowers, to make you prettier and earn you a second look. Maybe it was kind of like that. It was in a time when a man like this owned the very path we are talking about. Or, more accurately, he was a gatekeeper on the path. A Sentinel of skin.

Once the trust had been established, the work could begin. He would get out a Bic pen and draw straight on to the skin. He drew the longest lines with a tattoo machine that I have ever seen. He could do a Tasmanian devil tattoo in eight minutes. That would take an average tattooer over an hour. He could work all day on a piece, and then all night. He could do it bigger, better, and faster than almost anyone else. And he did; he did always have something to say about whatever it was, you know. never in an arrogant way, but more- “look, let me tell you something.”

It wasn’t a lie, he never said, “Oh, that’s cool,” and he still doesn’t! “Those flowers are too big!” “A snake doesn’t move like that!” “That’s not the way you draw a panther!” And that was what I wanted to say in this paragraph- that he could enlighten you. Not totally, of course, but “here, here’s a little bit of knowledge, of wisdom.” Of course, you had to shut up long enough to listen. But that’s not usually a problem as this big man intimidates most into almost utter silence, but then- he will draw you out. And this is part of the tattooists stock in trade- the bedside manner- and I tell you- doctors, nurses, dentists- all of em could learn a thing or two here, especially sitting in the Big man’s chair.

So I look around and see that here I am, out on the path- the tattoo path. At the moment, I am here alone. I think, I write, of a great man. I can look back on where I have been and he was there. From the beginning, and back before; he was on the path with Ed Hardy, Bob Roberts, Chris Trevino, Bob Shaw! Talk about a golden era. But I have bad news for you that are new here. The best tattoo artist in Dallas no longer works here. His shop is now located in Tulsa, Oklahoma.

Many of you had this one guessed from the get-go, some of you are still in the dark. That shop in Tulsa is called the by the same name that his Dallas tattoo shop was. That name makes many of us out here on the path very happy. Pair-O-Dice Tattoo. And the tattoo giant? Richard Stell. The Painter of Pictures. 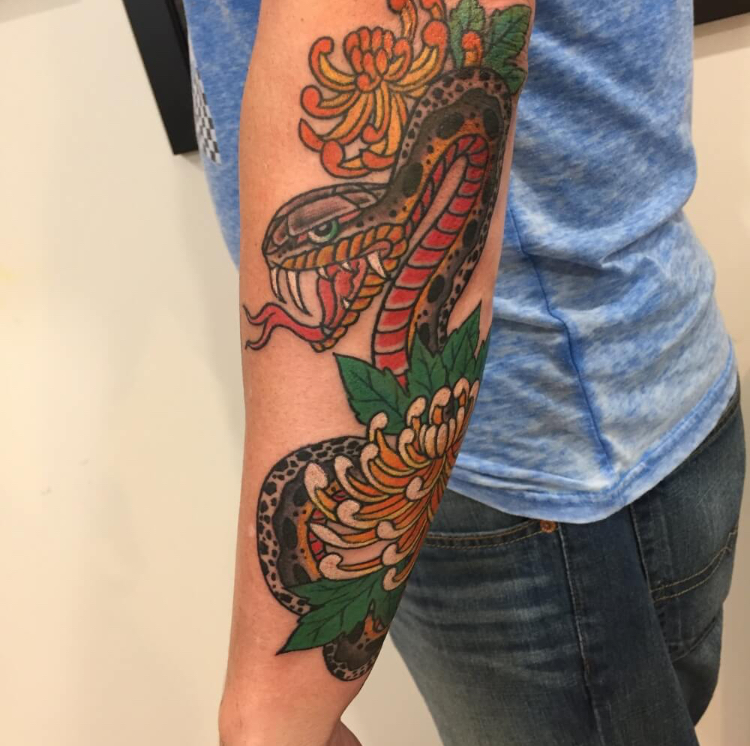 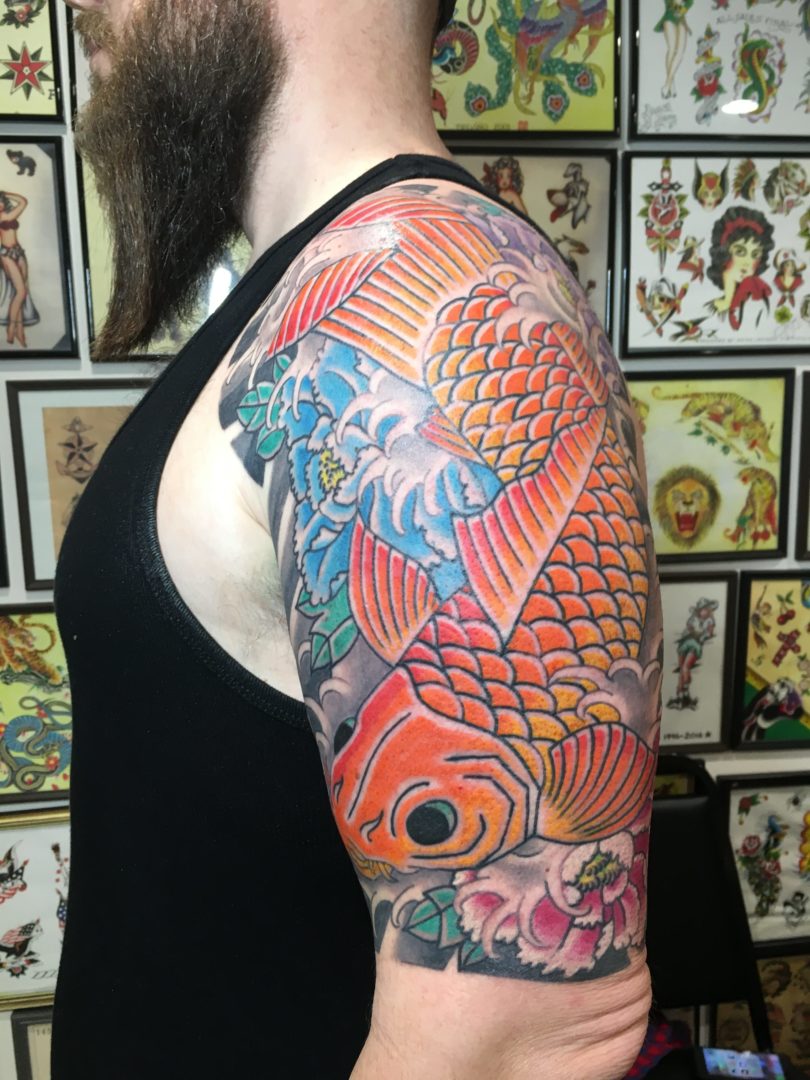