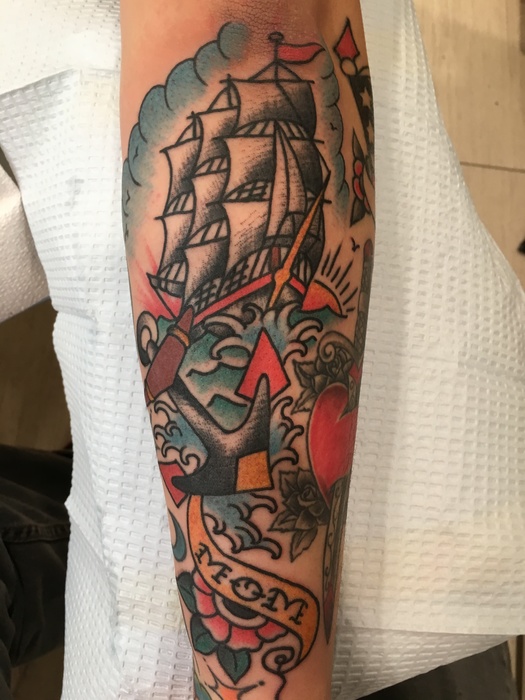 Tattoo People Give Off An Energy

Tattoo people, it struck me the other day, have that lust for life you just dont encounter in everyone you meet. Down at city hall, down there at the bank, in the halls of your school- they dont all have that energy, that hunger. Those wide eyes, looking for adventure, or experience, or enlightenment. Ive heard it called sleepwalking, these poor souls go through the motions, but they seem to receive no joy from it. The traditional tattoo person is bouncing off the walls, calmly. Their blood is boiling. Their appetites are great. Their laughter can be heard around the corner, down the block. Excitement can be sparked by a wild night, a good book, a neighbor’s dog. The stimulus is not necessarily important. It is the responsiveness of the tattoo person that brings the world around her alive.

Of course, alas, I am stuck in the past again, in thinking of these persons of light, of color. I am once again tormented by tremors of negativity, words that must come out to tell the whole of the story. How could I whitewash this thing called traditional tattoos I love so much, pretend that all is well and God is in his heaven as far as tattoo culture is concerned? But I grow disappointed with myself, always slipping into darkness and discussing our flaws rather than celebrating our strengths. But you notice, I tried to begin with positivity!

I cannot let the false members of the tattoo world bask in these words as if they are their own. In the Japanese Traditional Tattoo iconography– there is a fox, kitsune, in Japanese. This animal can shape shift, become anything it desires to attain it’s own selfish needs. Usually, and most famously, it transforms itself into a beautiful woman, who gets just as close as she can to the emperor before attempting to devour him. Like the kitsune, many among us are not what they appear to be. They look real enough, on the outside. What I need to say is: wearing a tattoo, wearing a hundred tattoos, doesnt make you one of these tattoo people that I am talking about. And Lord knows I am not the judge of who is and who aint. The tattoo gods are the judge of that. But I think we all know, maybe unconsciously, maybe not, the true from the false, the light from the shadow, the full from the empty.

So what is it that defines these tattoo people? Do they still exist? Do the old timers think that the true spirit is gone? It true tattooing disappearing, even as tattooing itself proliferates like maggots on the rotten flesh of a busted dream? Or has the soulful side of any culture, any art, any music, always been the minority, hiding in plain sight, operating like the wind, accessing and occupying it’s own space, existing freely and spiritually and growing there in a special place?

The tattoo people love tattoos. They love the traditions that the work was built upon. They may hold these traditions sacred, they may, seemingly profanely, but actually respectfully, try and take tattooing to the next stop up the road. They may hide their tattoos, they may show tattooed hands below their shirtsleeves. They may party extremely, they may be teetotalers. Some of em give tattoos, some of em get em. They are connected to a thread that leads to the center of the universe. They feel the pulse of the tao, although they probably dont even know it. They have an inkling, as to the past, the future. They see an image of a dagger piercing a rose- they pick up on it, they know what it means. They may or may not be able to put it into words. They can tattoo the hell out of it though, or sit there stoic as a statue and get it put on. The symbols resonate with them. The walls of the tattoo studio are singing. The hymns, the blues of the tattoo people. The buzz of the machine takes them back to that trip to the Grand Canyon. The green of the leaves recalls the churning green waves off the coast of Maine, that maybe they saw one time. The stars and dots, spreading out, like the blanket of stars above Yellowstone National Park. Or the scum of the bathroom at CBGB’s. The downtown public library. The BART train. Guitar strings, toolboxes full of tools. Museums, street corners, red light districts, active duty. Long nights studying. Waking up early to care for the baby. Opening up your wrist, relaxing you hand, and staring down at your forearm as the tattooist traces the first black line into that purple stencil and you go off into an ecstasy that is pain and pleasure all at once. Tattoo people are like this.

A True Tattoo Artist And His Personal Conquests

Anyways Im just sittin at the kitchen table thinking about this stuff. I just finished returning my tattoo emails for the night. This is the spot I sit in to do this. It is nice too be at home, but bittersweet working into the night as my wife falls asleep on the couch 8 feet away. The writing has always been fun for me, sometimes it has been downright necessary. It is cathartic to scribble cusswords in a diary. To record personal conquests. To describe faraway lands. To write a song, a poem, a haiku. To write a letter to a friend. To simply write a list of dreams or to- do’s. Who cares!?

Keeping up the website is another facet of the ever sprawling out job of being a tattoo artist. Sure, there are many ways to do it! You can hide under a rock and still get to do a tattoo every once in a while. You can be unable to tattoo your way out of a wet paper bag, but with the right publicity, you’re gold. You can stay on the road, you can quit the road, but you better get yourself some business. And that means being out here, in one way or another. I used to stand at the side of the highway and stick my thumb up into the air. Now, I stand at the precipice of the internet and toss words into the void. They are my true voice, they are here, in case you would like to know me better. I hope that each phase is a rope that binds you to my services. I want for each sentence to turn into a black panther tattoo. I hope that each paragraph becomes a new customer. I hope that every article helps to give you one more reason to be a customer of mine for life. And if you think to yourself, “a black panther tattoo, who the hell wants that?”, then I hope that you will see that I am not the tattoo artist for you.

I am looking to provide an exceptional level of service to those true tattoo people! I am invested in studying, practicing, and applying traditional tattooing in the style of the masters of American and Japanese ways. The dharma of these complete systems, indeed high and holy, perfect without our input, pristine as they have been handed down to us. Dont try to get cute. The buddhists will tell you “don’t get too clever”. Do right, and fear not. The images were handed down from something greater than us. They were handed down from the tattoo people of yore. Listen, look, and learn. Practice the truth in it. Do not focus on your ego pictures. Look outward, upward to the skies. See the expanse of it. Open your heart. Allow the vibrations to rock your soul a little more free from the trappings of your body, the skin you will adorn with these pictures of the inside. The images are there, use them. Take this special gift. Aspire to be, take pride in being, and always remain, a tattoo person. And if you’re looking for your next American traditional or Japanese traditional tattoo, get in touch with me today! 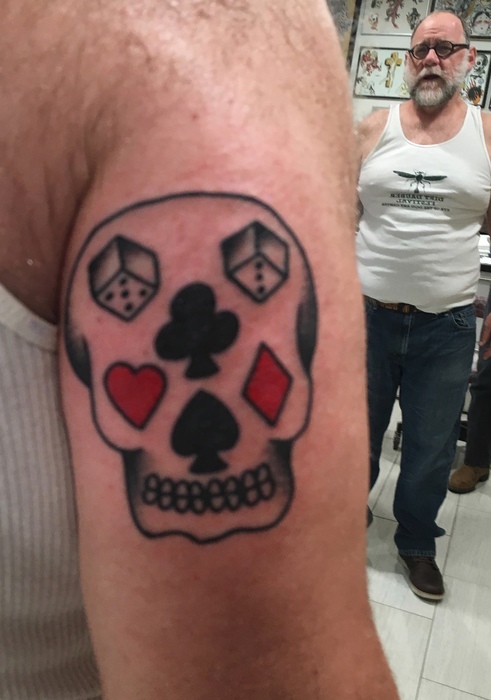 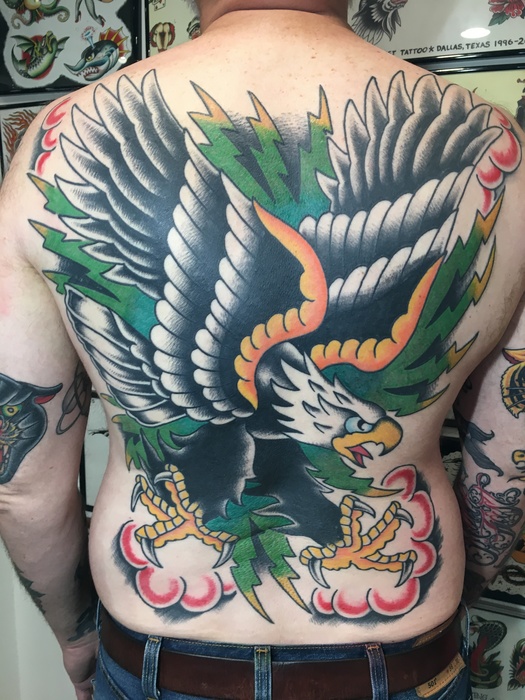