The Triangle of Interaction for Your Dallas Tattoo

The Triangle of Interaction for Your Dallas Tattoo 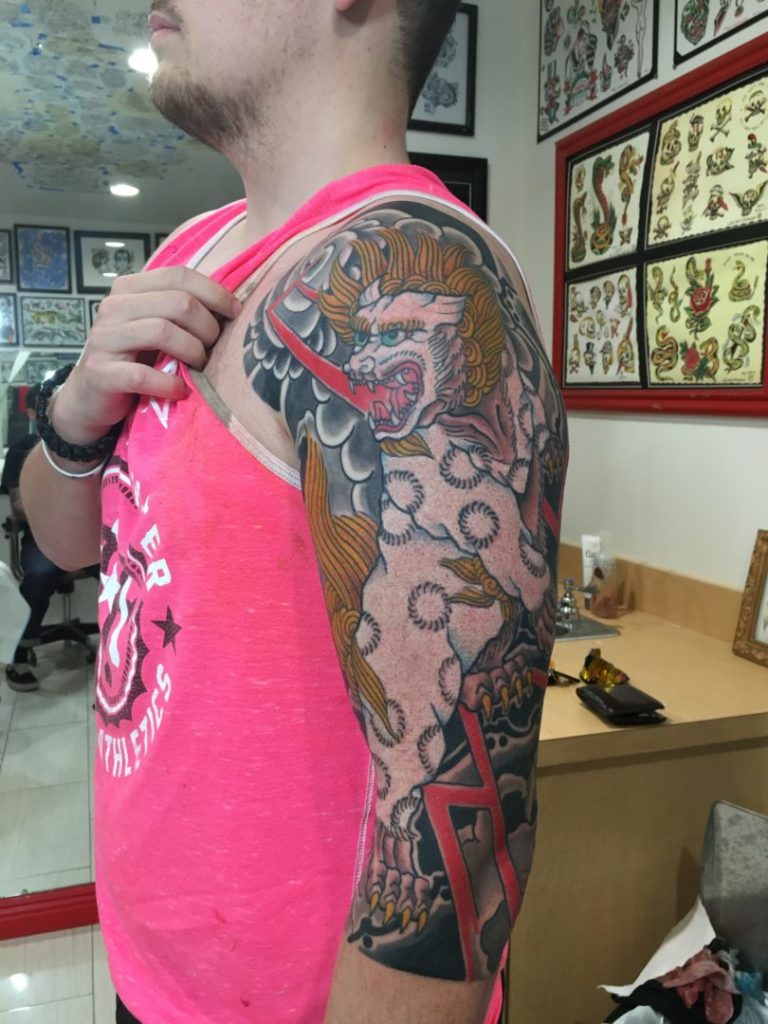 There is a triangle of interaction happening with Traditional American or Traditional Japanese tattooing, an alchemy that is greater than the sum of it’s parts, a music that dances with call and response, until a tattoo is born, like a reptile from an egg.

Using the triangle and being part of it, we answer the call of the tattoo gods. We carry on the designs and the tattoo images to the next generation, like the ghosts of our grandfather’s tattoos pointing us towards the way to come of age.  No matter at what stage of life we are all just children, beginners in the eye of infinity, somewhere on the wheel of life, bound by karma and the laws of heaven.

Get Inked by a Professional Tattoo Shop in Dallas

Through determination and experience, Carl Hallowell has become one of the best tattoo artists in Dallas.  We understand that the tattoo is really all about the customer and yet, left up to them, you will not reach sublime tattooing, as it is not their area of study.  Just as most of us go out and buy a car, we do not design and build it ourselves.  The tattooer who has a plan reaches out to help.  He can build a bridge between the dream of the customer and the reality of lines on paper, making tattooing on skin come alive.

Tattoo design is not a teenagers sketch on a school notebook. Tattoo design is not another person’s tattoo previewed on Pinterest through the screen of your iPhone that your so-called tattoo artist prints off using Bluetooth technology.  No, the best tattooing in Dallas is based on soul, substance, blood, sweat, and tears.

We Understand Traditional Tattoos in all Cultures

Nick here is a great customer to work with; energetic, exuberant and full of life. Also, his life path has led him to the Japanese tattoo.  Nick has been lucky enough to have spent time living in Japan, absorbing the language and culture, seeing the natural beauty of a foreign world where even the clouds look different.

Karashishi Botan is Nick’s design.  As a young man, I know that he is the only one among his peers to wear this type of work, the holy Irezumi.  When it comes to traditional tattoos, Irezumi is the high art, I am just a lowly servant of it’s glory. I put it on like a mason puts on brick.  I study the books and burn the candle; I wash the paintbrushes and grind the Sumi.
The Shishi also commonly called a Fu Dog, is a protector and a teacher.  The Peony, or Botan Flower is its perfect pairing.  We have placed the Botan on the inside of Nick’s arm here, opting to go big on every design element we used.  We talked about it, we looked at different sizes and made the final decision together.

In the end it is a large Botan, red like the blood of the samurai, true to the traditions of Japanese tattooing, and the traditions of Irezumi. These are the ways to honor the tattoo gods, by telling the story the way it makes sense. You honor the tattoo gods by making the ultimate blood sacrifice, gaining the tattoo as you suffer for it; with the outlines slicing, the shader digging, and the heal always burning and itching, until the whole thing becomes part of you forever.

How do you want your tattoo represented? There are many tattoos in Dallas and many Dallas tattoo shops that remind me of the Flea Market tattoo artists I had seen in the barrios of my youth. It is your choice, and, after all, how many skins do you have?

Is a bad job just a cover up away? Can a laser erase the mess made by a careless practitioner of the sacred art of tattooing? I would say nay.

But get in touch and begin to work the magic triangle of you, me, and traditional tattoo and you will wear the envy of those who know not where eagles dare.  However, remember that it is lonely at the top and nothing worth having comes easy.

next postCreating Strength, Love, and Family Through Traditional Tattoos

Yin, and Yang A clean back, a white piece of paper, amazingly inspirational and full of possibility…  I like to choose Simplicity…  Overwrought ideas look nervous, unsure of themselves… or cluttered, like a Dirty Closet… or suffocated, the line choked, unable to breathe… Most of this just things I’ve learned the hard way, what not to do… All these opinions resting on the back burner...

A Tattoo from Last Night

I was happy that my client requested color in his memorial to his Mother. I felt that I got a chance to do this classic motif justice, now that my drafting skills have improved. I believe the color really adds emotion to the piece and gives it a sense of harmonious balance. The interplay between the colors seems to suggest a solemn celebration, rather than brooding grief. Also, this tattoo is...

Copyright © 2016 Carl Hallowell. All Rights Reserved.
Back to Top