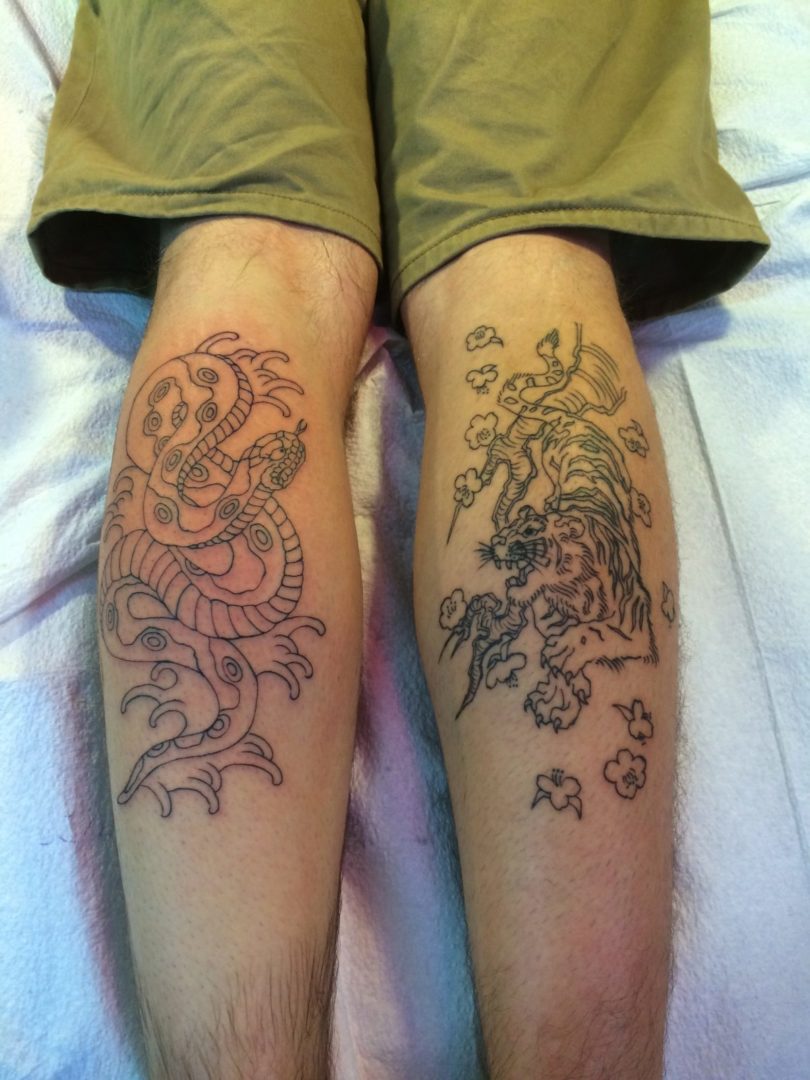 This young man here came in with the right idea. I am very lucky he came to me. Or perhaps I deserved it. Or karma led to this chance meeting. Or the tattoo gods presided over the realm we walked that night. Either way, here we are, and there is nothing left to do but go to work.

Wow, he came in wanting Irezumi. I don’t know if he’s a day over 18. I do know that I put on his first tattoo, the tiger outline, or tora sujibori pictured here on his right leg. He was in no hurry and felt that the outline would be fine to start with. Where did he get this patience? From his Grandfather, as I had gotten mine? There is no time to ask, only a pause to admire his approach. Then, I tear into the tattoo outline and do not stop til it is done.

Where did he learn of this strange and alluring art? What was the reason for his predilection towards this fascinating style? He barely even looked at the walls, the rows and rows of flash hung there. The skulls, the red roses, the clipper ships and anchors. He wanted a japanese tattoo, and that was that. Amazed, I went into the back room to draw it up.

I did not look at another tiger on instagram, I did not google search Japanese tiger tattoos. Nor did he. Like a man, he walked in and simply told me what he wanted. He did not show me a photo on his phone. He used words to explain what he wanted, the way they used to do when I first started in this tattoo industry. Why can I not compliment his ways without trashing the ways of the majority? Perhaps I am bitter, old , and jaded. Perhaps I have lost touch with the communication methods of the times. Or maybe, perhaps I seek solutions to the sad state of affairs in tattooing today. Perhaps this is my way of calling attention to the ways we’ve gone astray, to paint a picture of a man who walks the way.

Definitely I want to be a positive influence on the world of traditional tattooing I love so much. I want my actions to lift tattooing up; I never want to be part of the reason it is becoming so waterlogged and limp. I want to be actually raging against the trends, against the phonies, against the opportunists, who plunder tattooing for all it is worth to them personally. Those that feast and feast on the very soul of tattooing, and then simply throw away the husk, as if spitting out a watermelon seed.

Positivity, not negativity, will be what lifts us up finally, but identifying the enemy is job one. In battle, there is a place for judgement, discernment. Tattooing in Dallas is currently in a battle against itself. We have let too many interlopers in. The money men, the bigwigs, the advertisers, and the art school students. Now, it is an industry divided amongst itself. Half of what comprises modern day tattooing I have no affinity with whatsoever. Half of the other half is so divorced from the history and basis of tattooing that it is like a lost babe in the woods, with no family to raise it up.

Getting back to our subject at hand, what a fine young man he is. The week after we put on the tiger tattoo, he came back for the outline of the snake, hebi sujibori. I delighted in the fact that he was in no hurry, another outline would suffice for now. No pressure, no rush. He would like to build his tattoos over time, brick by brick, blow by blow, day by day. I think he’s got a good outlook. He’s definitely got good taste. 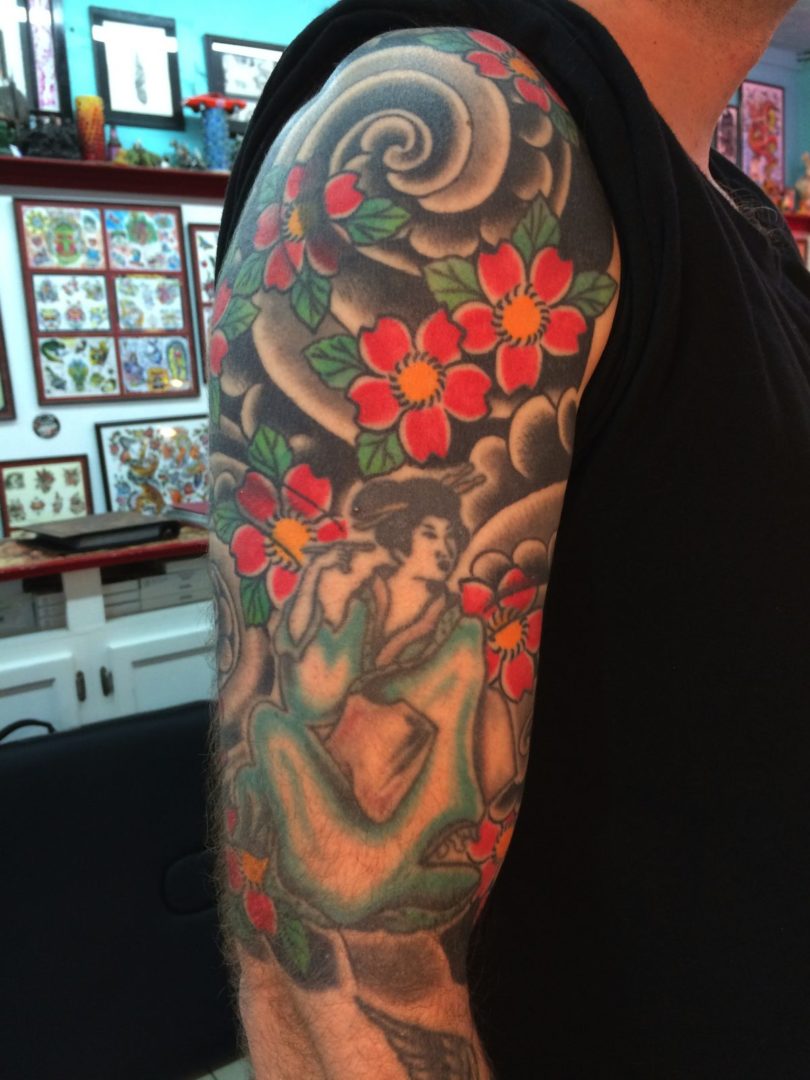 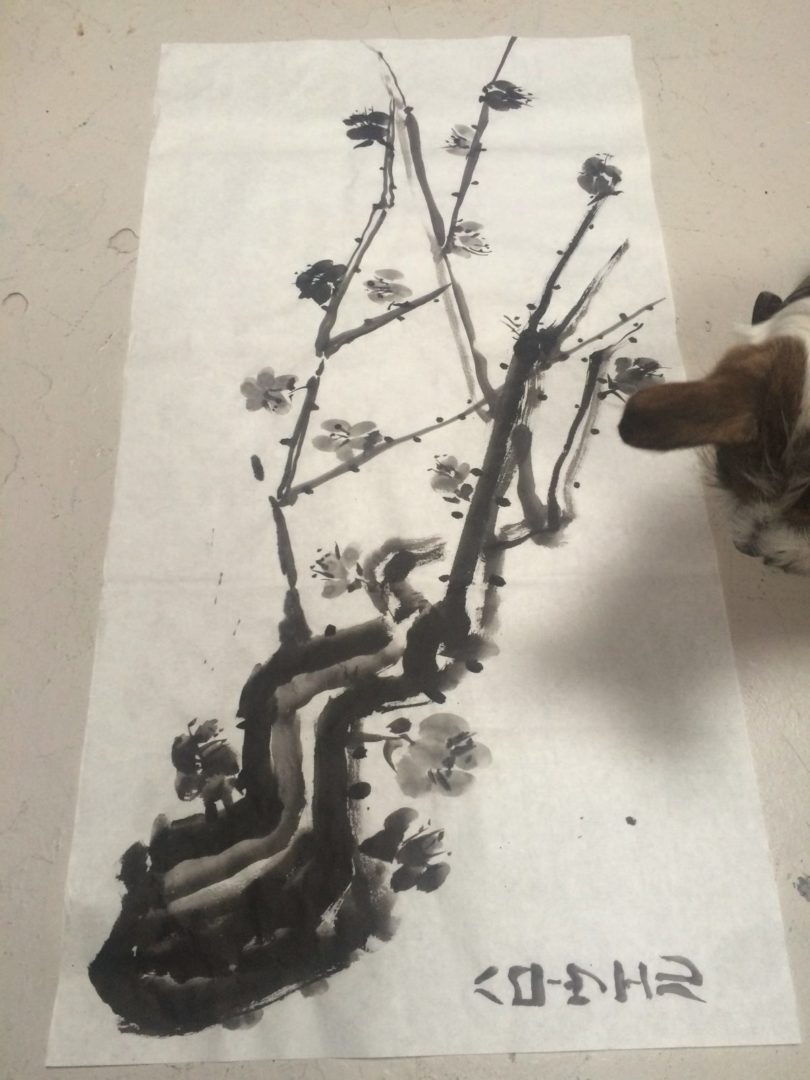